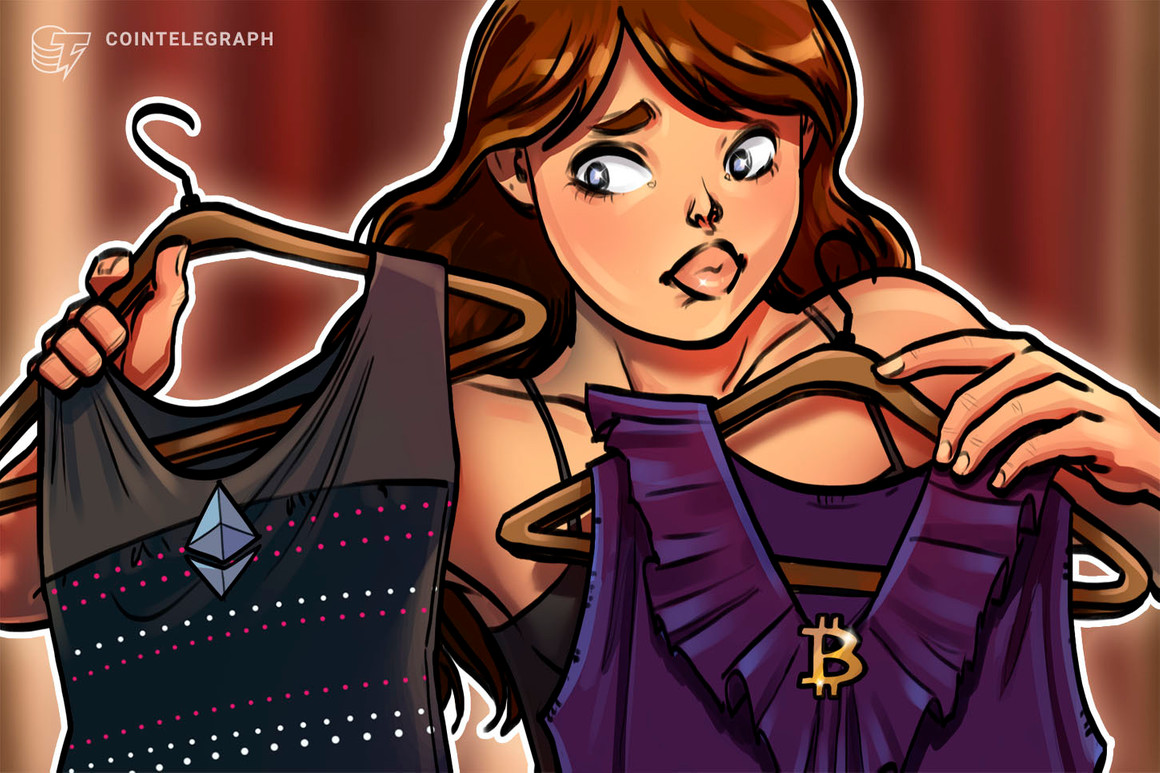 Ethereum’s native token Ether (ETH) has declined by more than 35% against Bitcoin (BTC) since December 2021 with a potential to decline further in the coming months.

The ETH/BTC pair’s bullish trends typically suggest an increasing risk appetite among crypto traders, where speculation is more focused on Ether’s future valuations versus keeping their capital long-term in BTC.

Conversely, a bearish ETH/BTC cycle is typically accompanied by a plunge in altcoins and Ethereum’s decline in market share. As a result, traders seek safety in BTC, showcasing their risk-off sentiment within the crypto industry.

Interest in the Ethereum blockchain soared during the pandemic as developers started turning to it to create a wave of so-called decentralized finance projects, including peer-to-peer exchange and lending platforms.

That resulted in a boom in the total value locked (TVL) inside the Ethereum blockchain ecosystem, rising from $465 million in March 2020 to as high as $159 billion in November 2021, up more than 34,000%, according to data from DeFi Llama.

Interestingly, ETH/BTC surged 345% to 0.08, a 2021 peak, in the same period, given an increase in demand for transactions on the Ethereum blockchain. However, the pair has since dropped over 35% and was trading for 0.057 BTC on June 26.

ETH/BTC’s drop coincides with a massive plunge in Ethereum TVL, from $159 billion in November 2021 to $48.81 billion in June 2022, led by a contagion fears in the DeFi industry.

Also, institutions have withdrawn $458 million this year from Ethereum-based investment funds as of June 17, suggesting that interest in Ethereum’s DeFi boom has been waning.

Bitcoin struggling but stronger than Ether

Bitcoin has faced smaller downsides compared to Ether in the ongoing bear market.

Also, unlike Ethereum, Bitcoin-focused investment funds have seen inflows of $480 million year-to-date, showing that BTC’s drop has done little to curb its demand among institutional investors.

Capital flows, coupled with an increasing distrust in the DeFi sector, could keep benefiting Bitcoin over Ethereum in 2022, resulting in more downside for ETH/BTC.

From a technical perspective, the pair has been holding above a support confluence defined by a rising trendline, a Fibonacci retracement level at 0.048 BTC, and its 200-week exponential moving average (200-week EMA; the blue wave in the chart below) near 0.049 BTC.

The ETH/BTC breakdown might coincide with an extended ETH/USD market decline, primarily due to the Federal Reserve’s quantitative tightenig that has recently pressured crypto prices lower against the U.S. dollar.

Conversely, weaker economic data could prompt the Fed to cool down on its tightening spree. This could limit Ether and the other crypto assets’ downside bias in the dollar market, per Informa Global Markets.

“Macroeconomic conditions need to improve and the Fed’s aggressive approach to monetary policy has to subside before crypto markets see a bottom.”

But given Ethereum has never reclaimed its all-time high against Bitcoin since June 2017 despite a strong adoption rate, the ETH/BTC pair could remain under pressure with the 0.027-target in sight.