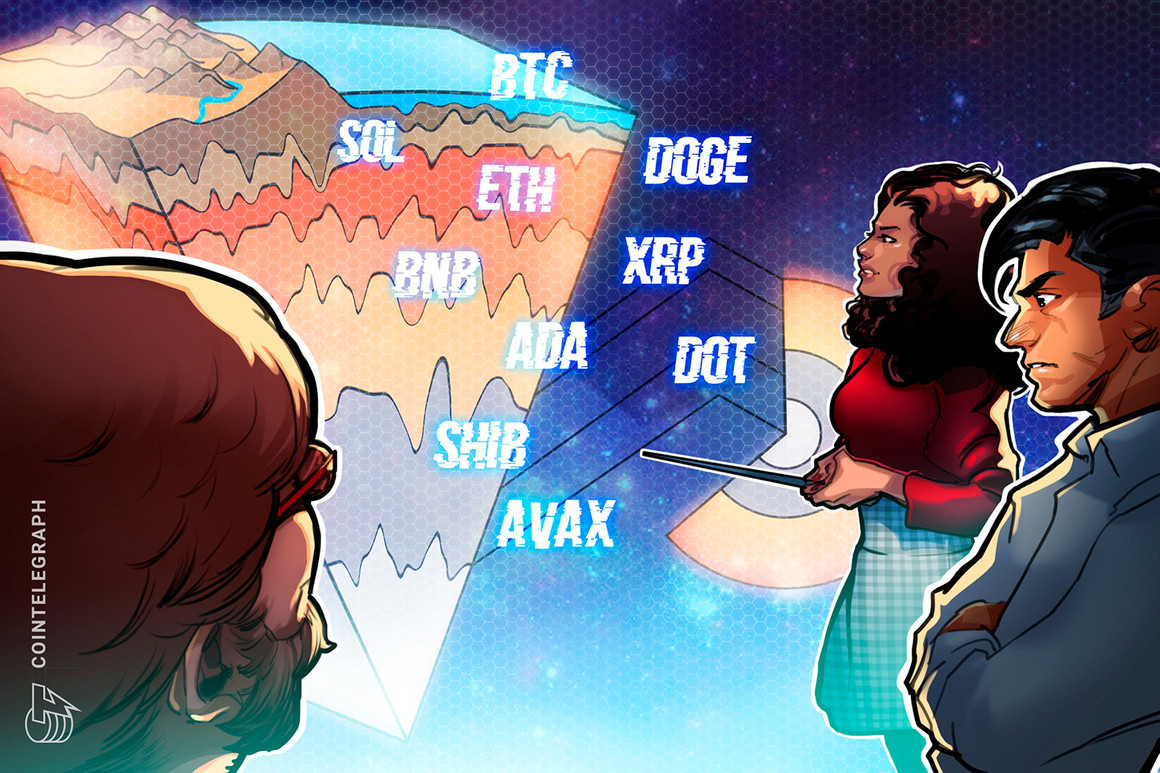 Bitcoin’s (BTC) tight correlation with the legacy markets continues to be a drag, especially as the United States equity markets remain in a firm bear trend. The Dow Jones Industrial Average is on track for its eighth consecutive negative week and the S&P 500 is close to plunging into the bear market territory.

Celsius (CEL) CEO Alex Mashinsky believes that the short sellers on Wall Street are looking for any weakness in crypto companies to “short and destroy.” Mashinsky blamed “the Sharks of Wall Street” for bringing down Terra (LUNA) and trying to destabilize Tether (USDT) and Maker (MKR) and “many other companies,” including Celsius.

Bear markets, though painful in the short term, tend to be good buying opportunities for long-term investors. However, it’s important to remember thatwhen the next bull phase starts, not all coins will return to their former glory.

Every bull market generally has a new set of leaders; hence, traders should try to identify the cryptocurrencies that are leading the market rather than buying the laggards. Nic Carter put it nicely when he said that everything will not make a comeback and “some things die permanently.”

Could Bitcoin and altcoins break below their recent lows or will bulls defend the supports successfully? Let’s study the charts of the top-10 cryptocurrencies to find out.

Bitcoin rebounded off the strong support at $28,630 on May 19 but the bulls could not push the price above the downtrend line. This suggests that bears have not yet given up and they continue to sell on rallies.

The bears will try to pull the price below $28,630. If they manage to do that, the BTC/USDT pair could drop to the May 20 intraday low at $26,700. This is an important support for the bulls to defend because if they fail to do that, the pair could resume its downtrend. The next support on the downside is $25,000 and then $21,800.

Contrary to this assumption, if the price rebounds off $28,630 and rises above the downtrend line, it will suggest strong accumulation at lower levels. The buyers will then try to push the price to the 20-day exponential moving average (EMA) ($32,332). If bulls clear this hurdle, the pair could rise toward the 61.8% Fibonacci retracement level at $34,823.

The bears pulled Ether (ETH) below the immediate support at $1,940 on May 18 and 19 but they could not capitalize on this move. The bulls bought the dip but could not push the price to the overhead resistance at $2,159.

Strong selling at higher levels has pulled the price to the uptrend line on May 20. If the ETH/USDT pair breaks below the uptrend line, the decline could extend to the crucial support at $1,700. The bears will have to sink the pair below this level to suggest the start of the next leg of the downtrend.

Contrary to this assumption, if the price turns up from the current level or $1,700, it will suggest buying on dips. The pair will then make one more attempt to clear the overhead hurdle at $2,159. If they manage to do that, it will suggest that the pair may have bottomed out.

BNB has been consolidating near the overhead resistance at $320 for the past few days. A tight consolidation near a stiff resistance indicates that bulls are not dumping their positions as they expect the recovery to continue.

If bulls thrust the price above the overhead resistance zone between $320 and the 20-day EMA ($326), it will suggest that the BNB/USDT pair may have bottomed out. The pair could then start its northward journey toward the 50-day simple moving average (SMA) ($381).

Conversely, if the price turns down from the overhead resistance and breaks below $285, it will suggest that the bulls have given up and may be closing their positions. That could pull the pair to $265 and thereafter to the critical support at $211.

Ripple (XRP) bounced off the $0.40 to $0.38 support zone on May 19 but the bulls could not clear the overhead resistance at $0.45. This suggests that while bulls are buying on dips, the bears have maintained their selling pressure near overhead resistance levels.

If the price continues lower and breaks below $0.38, the XRP/USDT pair could drop to $0.33. This is an important level to keep an eye on because a break below it could resume the downtrend. The pair could then drop to $0.24.

Contrary to this assumption, if the price rebounds off the support zone once again, the buyers will try to push the pair to $0.50. A break and close above this level will be the first indication that the pair may be bottoming out. The next stop on the upside could be the 50-day SMA ($0.64).

The bulls are attempting to defend the $0.50 support in Cardano (ADA) but the bears are in no mood to let go of their advantage and they continue to sell on every minor rally.

If the price slips and sustains below $0.50, the ADA/USDT pair could retest the critical support at $0.40. This is an important level for the bulls to defend because a break below it could signal the resumption of the downtrend. The pair could then drop to $0.33 and thereafter to $0.28.

Contrary to this assumption, if the price turns up from the current level, the buyers will attempt to push the pair above the 20-day EMA ($0.63). If they manage to do that, it will suggest that the selling pressure could be reducing. The pair could then rise to the breakdown level at $0.74.

Solana (SOL) is in a strong downtrend. Attempts by the bulls to start a recovery on May 19 failed as bears continue to sell at higher levels. The bears pulled the price back below the psychological level at $50 on May 20.

If the price continues lower, the SOL/USDT pair could drop to $43. This level may act as a strong support but if bears pull the price below it, the next stop could be $37. If this level also cracks, the decline could extend to $32.

On the contrary, if the price turns up sharply from the current level or the support, it will suggest accumulation by the bulls. The buyers will then attempt to push the pair to the 20-day EMA ($64). A break and close above this level could open the doors for a possible rally to $75.

Dogecoin (DOGE) bounced off the immediate support at $0.08 on May 18 but the recovery continues to face selling at higher levels. This suggests that the sentiment remains negative and traders are selling on every minor rise.

If the price continues lower and breaks below $0.08, the bears will fancy their chances and try to pull the DOGE/USDT pair below the May 12 intraday low at $0.06. If they manage to do that, the next leg of the downtrend could begin and the pair may drop to $0.04.

This negative view could invalidate in the short term if the price turns up from the current level or the support beneath and rises above the psychological resistance at $10. Such a move could open the doors for a recovery to the 50-day SMA ($0.12).

Related: Ethereum preparing a ‘bear trap’ ahead of the Merge — ETH price to $4K next?

Polkadot (DOT) slipped below $10.37 on May 18 but the bulls purchased this dip and tried to push the price back above the level on May 19. However, the bears stood their ground and are attempting to flip $10.37 into resistance.

If the price slips below $9.22, the DOT/USDT pair could retest the support zone between $8 and $7.30. The bears will have to sink and sustain the price below this zone to indicate the resumption of the downtrend. The next support on the downside is $5.

Conversely, if the price rebounds off the support levels, the bulls will attempt to push the price to the 20-day EMA ($12). This level may act as a strong resistance but if bulls overcome this barrier, it will suggest that the sellers may be losing their grip. The pair could then attempt a rally to the 50-day SMA ($16).

Avalanche (AVAX) is in a downtrend. The price action of the past few days has formed a pennant, which usually acts as a continuation pattern.

If the price breaks below the support line of the pennant, the AVAX/USDT pair could retest the critical support at $23.51. A break and close below this level could signal the resumption of the downtrend. The pair could drop to $20 and thereafter to $18.

Alternatively, if the price rises from the current level, the buyers will try to push the pair above the pennant. If they manage to do that, the pair could pick up momentum and rise to the 20-day EMA ($42.35). The bulls will have to clear this barrier to challenge the breakdown level at $51.

Shiba Inu (SHIB) has been stuck between $0.000010 and $0.000014 for the past few days, indicating indecision among the bulls and the bears. This indicates that bulls are attempting to form a bottom but the bears are not allowing the rebound to sustain.

If the price rises above $0.000014, it will suggest that bulls have absorbed the supply. That could clear the path for a possible rally to $0.000017 where the bears may again pose a strong challenge. The bulls will have to clear this resistance to indicate a potential trend change.