What you need to know:

The Ethereum 2.0 deposit contract now has over 12,055,858 million ETH. This amount worth $34.391 billion translates to roughly 10% of Ethereum‘s total circulating supply of 120,576,553 ETH. The progress of Ethereum deposits to the contract since November 2020 has been captured by the following graph and data showcasing a list of top ETH 2.0 depositing addresses.

Kraken Continues to be a Top Depositor to the Ethereum 2.0 Address

The list shows that the top Ethereum depositing addresses belong to Lido Finance, the crypto exchange of Kraken, Staked.us, Bitcoin Suisse, and Huobi. The list of the top depositing addresses shows that the crypto exchange of Kraken remains amongst the top depositors to the address. This fact was also highlighted in December 2020 when staking on the contract had just commenced.

To note is that the 12 million Ethereum currently in the ETH 2.0 deposit contract will not be available till a little longer after the Merge is complete. The latter was initially estimated to occur in June and will switch Ethereum’s proof-of-work algorithm to proof-of-stake, which is more environmentally friendly. However, the Merge has been extended with no definite launch date as Ethereum developers iron out the final details.

Ethereum Price Continues to Be Affected by a Crypto-Wide Pullback 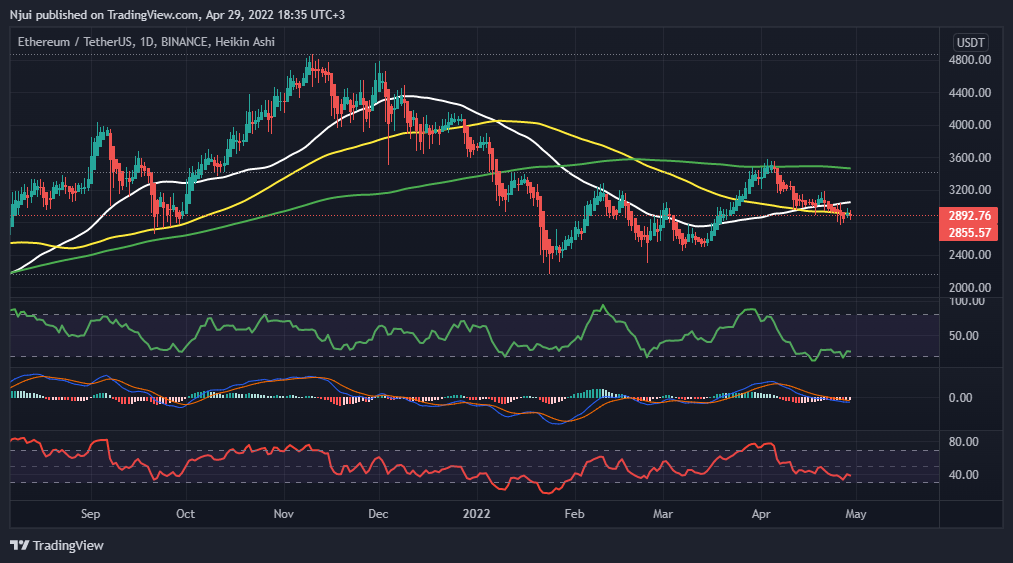 However, Ethereum’s daily MFI, RSI, and MACD are in oversold territory, hinting at a potential bounce in the coming week that doubles up as the beginning of the new month of May.