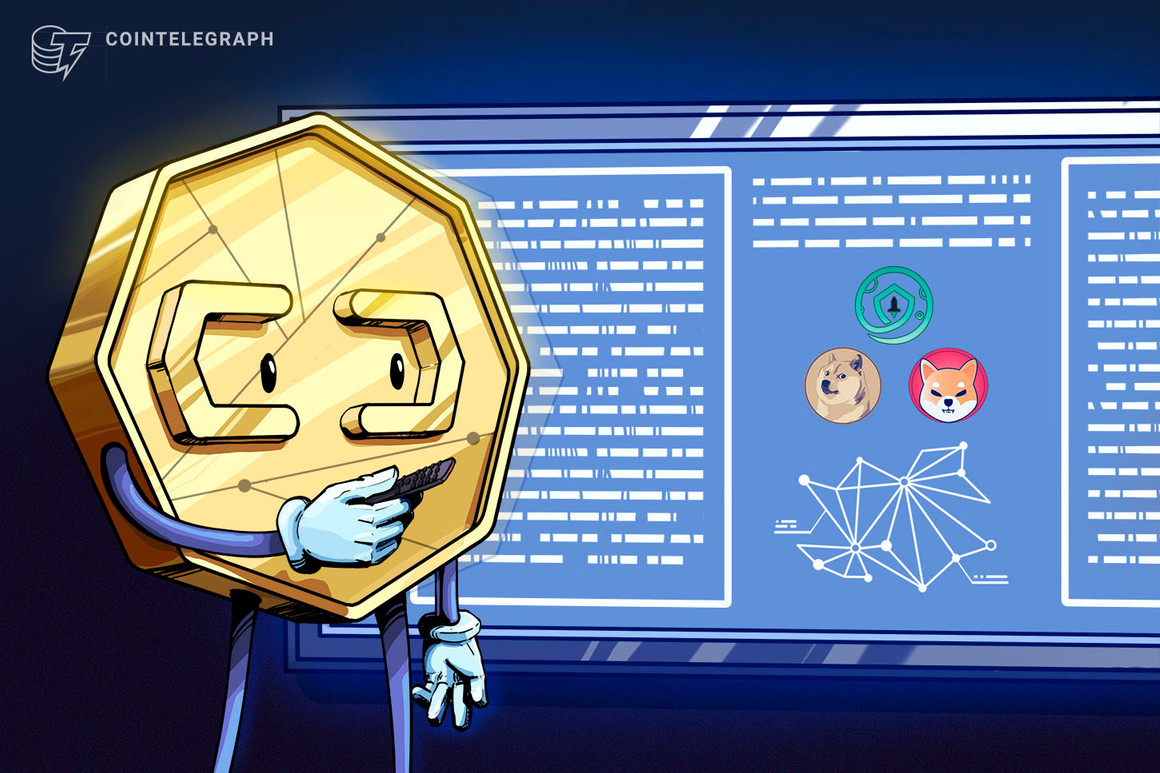 Memecoins briefly took the cryptocurrency market by storm in 2021 after steady attention and shilling from big-name influencers like Elon Musk and Mark Cuban helped propel coins like Dogecoin (DOGE) to 100x gains.

As one should expect, in the crypto market, rapidly rising prices have a tendency to reverse course just as fast and many of the formerly high-flying meme tokens now find themselves struggling for survival as the market matures and investors look for real-world use cases.

Let’s take a look at some of the most popular memecoins of 2021 to see whether they were just a flash in the pan or if there are fundamental developments that may prove fruitful in the long-term.

Since that time, the price has deflated along with the wider crypto market and currently trades at a $0.135.

Out of all the memecoins, DOGE continues to be the most high profile of the pack despite not having any major developments in the works. It remains one of Elon Musk’s favorite Twitter topics and its price saw a notable bump recently when Musk started making offers to buy Twitter and take it private.

The move by Musk led to speculation that DOGE could be added as a tipping currency on the social media platform if the deal eventually goes through, which led to a brief pump in the price of DOGE.

Details about what comes next for Dogecoin are sparse with some chatter still circulating about earlier discussions to make the network proof-of-stake, but nothing concrete has been announced.

One developer for the project will be holding a workshop exploring messaging services within person-to-person protocols like Dogecoin, indicating that there is some exploration into other possible use cases for the longest-running meme-themed network.

While Dogecoin receives a lot of the big influencer attention, Shiba Inu (SHIB) had one of the biggest impacts on the meme scene in 2021 after its price increased more than 5,799,999,900% from its low in October 2020 and helped one savvy trader turn a $3,400 bet into a $1.5 billion payday.

The price of SHIB currently trades at $0.000024, a decline of 73% from its all-time high, and the token regularly sees a daily trading volume in excess of $500 million.

SHIB holders experienced a slight bump in price on April 12 when the token was listed on the popular trading app Robinhood, but the continued weakness in the crypto market has all but erased those gains.

On the development front, the team at Shiba Inu is currently focusing its efforts on expanding the Metaverse capabilities of SHIB through the launch of a land bid event that offers members of the Shiba Inu community the opportunity to buy virtual land within the ecosystem.

The roadmap for the project also points to the ongoing development of Shibarium, a layer-two scaling solution being designed specifically for Shiba Inu that will help the protocol escape the high fees of transacting on the Ethereum (ETH) network.

SafeMoon (SFM) also launched early-on in the meme coin hype cycle and set out to reward loyal investors and discourage speculators through the creation of an automatic liquidity pool.

At the beginning of 2022, the Safemoon protocol upgraded to v2, which included a token revaluation that decreased the supply by a factor of 1,000.

Since the migration to v2, the price of SFM has continued to trend lower and currently trades at $0.00068 according to data from CoinGecko.

On the development front, Safemoon announced that it would be launching the Safemoon Card for community members and this would allow them to use their SFM as well as other cryptocurrencies to make daily purchases. The waiting list for the card opened on April 8.

Other developments include the release of a new version of the Safemoon wallet, the launch of Live Crypto Party, a “party-to-earn” metaverse platform that rewards users in cryptocurrency and NFTs for having fun online and offline.

Ethereum’s Active Addresses Have Decreased By Only 7% Despite ETH’s 56% Drop From its ATH
Bitcoin bulls aim to flip $30K to support, but derivatives data show traders lack confidence
Ethereum devs tip The Merge will occur in August ‘if everything goes to plan’
Binance CEO CZ to support Terra community but expects more transparency
US federal judge approves of Justice Dept criminal complaint on using crypto to evade sanctions