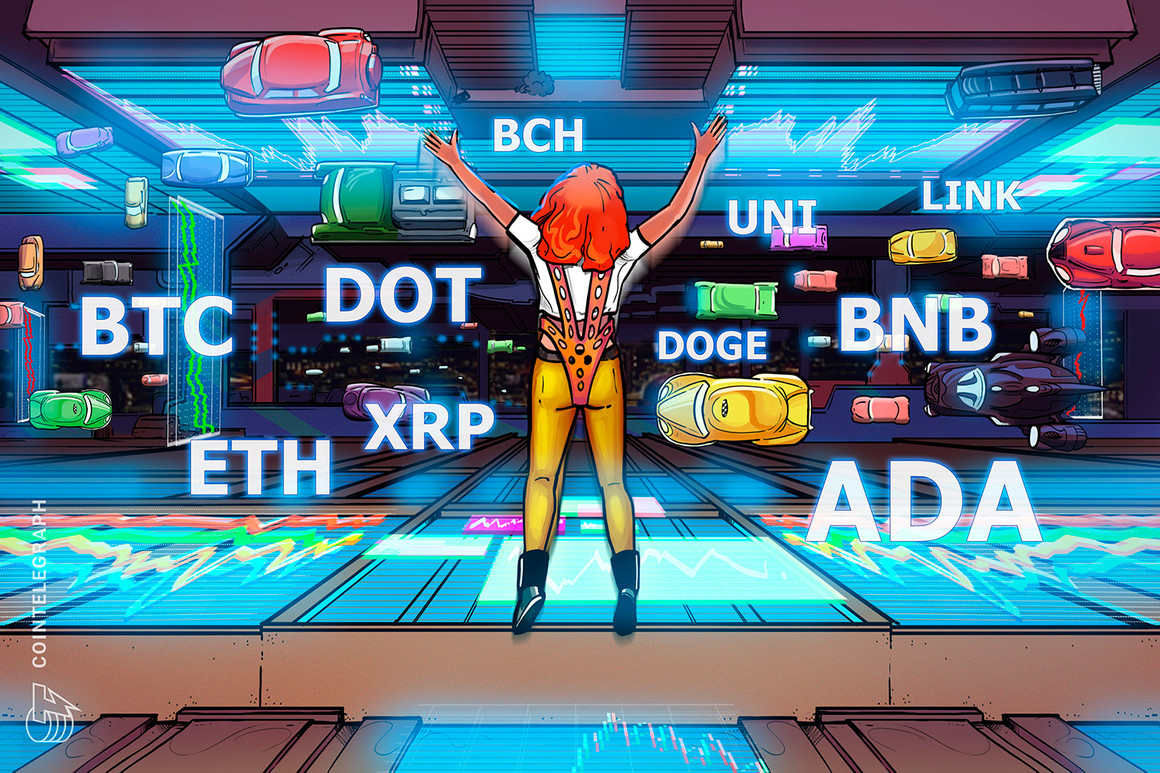 Bitcoin (BTC) dropped back below $39,000 on Aug. 2, suggesting that short-term traders were booking profits after the price failed to close above $42,451.67.

However, lower levels could again attract buying as seen in late July. Data from Santiment showed that Bitcoin held on wallet addresses storing between 100 and 10,000 Bitcoin rose to a new all-time high at 9.23 million Bitcoin on Aug. 1. The previous all-time high for this group of investors was recorded on April 5, just over a week before Bitcoin hit an all-time high of $64,854 on April 14.

Santiment highlighted that the “addresses have accumulated approximately 170,000 more Bitcoin” in the last four weeks. A similar pace of purchase was seen in late December 2020, just before the start of the strong bull move in 2021.

CoinShares data showed that the assets under management in Bitcoin-focused funds dropped by $20 million last week, its fourth successive weekly decline. Over the past month, Bitcoin funds have witnessed cumulative outflows of $67.8 million.

The data was not all bearish because multi-asset funds attracted cumulative inflows of $7.5 million last week and $11.9 million over the past month.

Could Bitcoin break out of its range and lead the crypto markets higher? Let’s study the charts of the top-10 cryptocurrencies to find out.

Bitcoin peeked above the overhead resistance at $42,451.67 on Aug. 1 but the bulls could not sustain the higher levels. This shows that bears are attempting to keep the range-bound action intact.

The upsloping 20-day exponential moving average ($36,968) and the relative strength index (RSI) above 62 suggest that the sentiment is positive. If the price rebounds off the 20-day EMA, the bulls will again try to push and sustain the price above $42,451.67.

If they succeed, it will signal the start of a new uptrend. The first target on the upside will be a move to the overhead resistance zone at $50,000 to $51,500 where bears may again mount a stiff resistance.

This bullish view will invalidate if the price turns down from the current level and breaks below the $36,670 support. That will indicate that the BTC/USDT pair could extend its consolidation between $28,805 and $42,599 for a few more days.

Ether (ETH) broke above the downtrend line on July 31, invalidating the descending triangle pattern. The bears sold at higher levels on Aug.1 as seen from the long wick on the day’s candlestick but the positive sign is that bulls did not allow the price to drop below the downtrend line.

The upsloping 20-day EMA ($2,273) and the RSI in the overbought territory indicate that bulls are in control. The ETH/USDT pair could now rally to the psychological level at $3,000 where the bears may again mount a stiff resistance.

Contrary to this assumption, if the bears pull the price back below the 20-day EMA, it may trap the aggressive bulls. This could result in long liquidation, which may sink the pair to $2,000 and then to the critical support at $1,728.74.

Binance Coin (BNB) rose above the overhead resistance at $340 on Aug. 1 but the long wick on the day’s candlestick suggests that bears are attempting to defend this level.

Although the price dipped back below $340 on Aug. 1, the positive sign is that the bulls have not given up much ground. If the price consolidates between the moving averages and $340, it will improve the prospects of a break above $340.

If that happens, the BNB/USDT pair will complete a bullish ascending triangle pattern. This setup has a target objective at $454.58 but the climb may not be easy because the bears will erect roadblocks at $380 and then again at $433.

On the downside, if bears sink the price below the moving averages, the pair could drop to the trendline. This is an important support to watch out for because if it cracks, the next stop could be $211.70.

Cardano (ADA) rose above the downtrend line on Aug. 1 but the long wick on the day’s candlestick suggests that bears are defending the resistance aggressively.

The marginally rising 20-day EMA ($1.27) and the RSI above 56 suggest that bulls have a slight advantage. If buyers can push and sustain the price above the downtrend line, it will invalidate the descending triangle pattern.

The ADA/USDT pair could then rise to $1.50 where the bears may again pose a stiff challenge. If buyers can overcome this resistance, the pair could start its journey toward $1.94.

This positive view will be negated if the price turns down and plummets below $1.20. That could open the doors for a further slide to $1.14 and then $1.

XRP has been consolidating near the overhead resistance at $0.75 for the past few days, which suggests that bulls are not booking profits as they anticipate the relief rally to extend further.

The moving averages have completed a bullish crossover and the RSI is above 63, suggesting the path of least resistance is to the upside. If buyers drive and sustain the price above $0.75, the XRP/USDT pair will complete a double bottom pattern, which has a target objective at $1.

If bulls fail to sustain the price above $0.75, short-term traders may close their positions. That could drag the pair down to the moving averages. A break below this support will suggest that the pair may extend its stay inside the $0.50 to $0.75 range for a few more days.

Dogecoin (DOGE) has been consolidating near the overhead resistance at $0.21 for the past few days. This suggests a state of uncertainty among the bulls and bears.

The flat 20-day EMA ($0.20) and the RSI near the midpoint indicate a balance between supply and demand. Usually, a tight consolidation near the stiff resistance resolves to the upside. If buyers thrust the price above the $0.21 to 50-day simple moving average ($0.22) resistance zone, the DOGE/USDT pair could rise to $0.28 and then to $0.33.

On the contrary, if bulls fail to clear the overhead hurdle, it could attract profit-booking. The pair could then gradually slide down to the critical support at $0.15. A bounce off this level may keep the pair range-bound between $0.15 and $0.21 for some more time.

The $16.93 level had acted as a stiff resistance between June 22 to July 8 but the bulls propelled Polkadot (DOT) above it on Aug. 1, which is a positive sign.

The moving averages are on the verge of a bullish crossover and the RSI is just below the overbought territory, suggesting that buyers have the upper hand. If bulls flip $16.93 to support, the DOT/USDT pair may continue its journey to $26.50.

On the other hand, if the bears pull the price below $16.93, the pair could drop to the 20-day EMA ($15.21), which may act as a support. If the price rebounds off this level, the buyers will again attempt to resume the relief rally. A break and close below the 20-day EMA could result in a retest of $13.

The long wick on Uniswap’s (UNI) candlestick on Aug. 1 suggests that bears are defending the overhead resistance at $23.45, but the positive sign is that bulls have not given up much ground.

The moving averages have completed a bullish crossover and the RSI is close to the overbought zone, indicating that buyers have the upper hand. A break above $23.45 will clear the path for a possible rally to $30.

If the price again turns down from the overhead resistance, the UNI/USDT pair is likely to find support at the 20-day EMA ($19.55). If the price rebounds off this support, it will improve the prospects of a break above $23.45.

Conversely, if the price turns down and breaks below the moving averages, it will suggest that the range-bound action may continue for a few more days.

Related: There’s no reason not to hold Bitcoin for 100 years, Michael Saylor says

Bitcoin Cash (BCH) has been trading between the 50-day SMA ($498) and the overhead resistance at $546.83 for the past four days. A tight consolidation near a stiff resistance suggests that buyers are not closing their positions as they anticipate a move higher.

If bulls sustain the price above $546.83, the BCH/USDT pair will complete a double bottom pattern. This bullish reversal setup has a target objective at $710.13. The moving averages are on the verge of a bullish crossover and the RSI is in the positive zone, which suggests that the path of least resistance is to the upside.

This bullish view will be invalidated if the price turns down from the current level and breaks below the moving averages. Such a move will suggest that the pair could extend its range-bound action between $383.53 and $546.83 for a few more days.

The bulls pushed Chainlink (LINK) above the overhead resistance at $22.07 on July 30 but the bears are not allowing the buyers to have a runaway rally.

The bears are attempting to pull the price back below $22.07 but the bulls have held the support for the past three days. The moving averages have completed a bullish crossover and the RSI is near the overbought territory, indicating that buyers have the upper hand.

If bulls drive the price above $24, the LINK/USDT pair could rise to $26.48. A break above this resistance could clear the path for a possible rally to $32.

Alternatively, if the price breaks below $22.07, the pair could drop to the 20-day EMA ($19.17). A strong rebound off this support will suggest that sentiment remains positive as traders are buying on dips. The bears will have to sink the price below the moving averages to gain the upper hand.