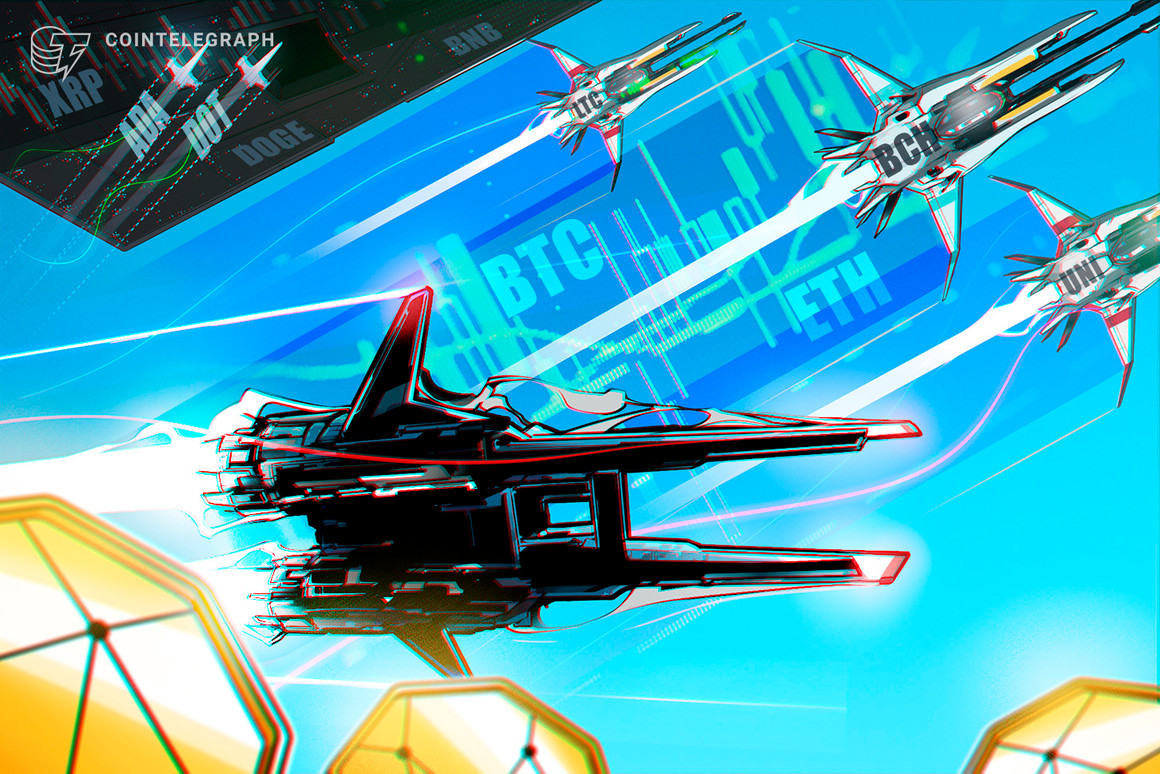 Even Citigroup plans to introduce crypto-related services due to the increasing demand from asset managers and hedge funds. Although inquiries about Bitcoin surged in August 2020, the investment bank has been slow to jump into the crypto market. Citigroup’s global head of foreign exchange, Itay Tuchman told the Financial Times that “crypto is here to stay and that we are just at the very beginning of the market.”

Long-term investors view dips as an opportunity to build their portfolio at favorable prices. These investors seem to be using the current correction in Bitcoin to buy. Glassnode data shows that 12,354 Bitcoin were withdrawn from Coinbase, with the intention of possibly being held in cold wallets for the long term.

While Bitcoin seems to be in accumulation mode, altcoins have continued their stellar run. Let’s analyze the charts of the top-10 cryptocurrencies to ascertain whether the altcoins have room to run or is a correction around the corner.

Bitcoin is facing stiff resistance near the downtrend line but a positive sign is that the bulls have not allowed the price to sustain below the 20-day exponential moving average ($56,036). This indicates that traders are buying on every minor dip.

If the bulls drive the price above the downtrend line and the $58,966.53 resistance, the BTC/USDT pair could pick up momentum and challenge the all-time high at $64,849.27. A breakout and close above this level will suggest the start of the next leg of the uptrend.

The flat moving averages and the relative strength index (RSI) just above the midpoint indicate the likelihood of a range-bound action in the short term. The possibility of a deeper correction will increase if the bears sink the price below $52,323.21.

Ether (ETH) remains in a strong uptrend. The correction on May 4 was short-lived as the bulls pushed the price to a new all-time high on May 5 and followed it up with another up-move on May 6. This shows the momentum remains strong and traders are buying on every minor dip.

If the buyers drive the price above $3,607.14, the ETH/USDT pair could continue its northward march toward the next target objective at $4,528.97.

A strong rebound off this support will suggest the sentiment remains bullish and traders are buying on dips as they anticipate the rally to continue. Conversely, a break below the 20-day EMA will indicate exhaustion and result in a drop to the 50-day SMA.

Binance Coin (BNB) remains in an uptrend but the negative divergence on the RSI signals that the momentum is weakening. The recovery on May 5 fizzled out at $656, suggesting that higher levels are attracting selling from traders.

If the bears sink and sustain the price below the 20-day EMA ($579), the short-term traders may rush to the exit. That could intensify the selling and pull the price down to the 50-day SMA ($451).

Contrary to this assumption, if the price rebounds off the 20-day EMA, the bulls will try to resume the uptrend. A break above $680 could clear the path for a rally to $808.57.

Dogecoin (DOGE) is in a strong uptrend. The bears could not even drag the price down to the 38.2% Fibonacci retracement level at $0.49, implying that the bulls are not waiting for a deeper correction to buy.

Buyers are trying to resume the uptrend by pushing the price above the $0.69 overhead resistance. If they succeed, the DOGE/USDT pair could start its journey toward the target objective at $1.05.

On the contrary, if the price turns down from the overhead resistance, it will suggest that traders are closing their positions on rallies. The bullish momentum may weaken if the bears sink the price below the 20-day EMA ($0.39).

XRP broke above the downtrend line on May 6 and May 7 but the long wick on the candlesticks suggests traders are booking profits at higher levels. The bears are currently attempting to pull the price back below the downtrend line.

If they succeed, the XRP/USDT pair could drop to the 20-day EMA ($1.43). The rising moving averages and the RSI in the positive zone suggest the bulls have the upper hand.

A strong rebound off this support will indicate the sentiment remains positive. If the buyers push and sustain the price above the downtrend line, the pair may rise to $1.96. A breakout of this level could start the next leg of the uptrend.

Contrary to this assumption, if the price turns down and slips below the 20-day EMA, it will suggest that supply exceeds demand. That could pull the price down to the 50-day SMA ($1.09).

Cardano (ADA) soared above the $1.48 resistance on May 6, which signaled the resumption of the uptrend. The bears tried to pull the price down today but the long tail on the candlestick suggests strong buying near the breakout level at $1.48.

The 20-day EMA ($1.36) has started to turn up and the RSI is in the overbought zone, indicating the path of least resistance is to the upside. The first target on the upside is $2 and if that level is crossed, the uptrend may reach $2.25.

This bullish view will invalidate if the ADA/USDT pair turns down from the current level and breaks below $1.48. Such a move could trap the aggressive bulls and result in a drop to the moving averages.

Polkadot (DOT) reached the $42.28 overhead resistance on May 6 where the bears are trying to stall the up-move. The altcoin has formed an inside-day candlestick pattern today, which suggests indecision among the bulls and the bears.

VORTECS™ data from Cointelegraph Markets Pro began to detect a bullish outlook for DOT on May 5, prior to the recent price rise.

As seen in the chart above, the VORTECS™ Score for DOT flipped green on May 5 when the price was $36.18, well before the indication of any rally.

Contrary to this assumption, if the price again turns down from $42.28, the pair may drop to the moving averages. A strong bounce off this support will indicate demand at lower levels and the bulls will make one more attempt to propel the pair to $48.36.

The 20-day EMA ($37) has started to turn up and the RSI is in the positive territory, indicating a minor advantage to the buyers. This bullish view will nullify if the bears sink the pair below $34.36. Such a move could result in a drop to $26.50.

After the strong surge on May 5 and 6, Bitcoin Cash (BCH) is currently witnessing profit-booking. The first support on the downside is the 38.2% Fibonacci retracement level at $1,263.10.

If the BCH/USDT pair rebounds off this level, it will suggest the sentiment remains positive and traders are accumulating at lower levels. The bulls will then try to resume the uptrend by pushing the price above $1,600.89. If they succeed, the pair could rally to $2,147.36.

This positive view will invalidate if the pair plummets and sustains below the breakout level at $1,213.51. That could result in a drop to the 20-day EMA ($1,030) where buying is likely to resume.

Litecoin (LTC) has been facing selling near the resistance line of the ascending broadening wedge pattern for the past two days. Although the bears tried to start a correction on May 6, the long tail on the candlestick shows strong buying at lower levels.

If the buyers can thrust and sustain the price above the wedge, the LTC/USDT pair is likely to race ahead to $400 and then $463.31. However, the rally of the past few days has pushed the RSI above 74, indicating the possibility of a minor correction or consolidation.

The first sign of weakness will be a break and close below $318.87. That could pull the price down to the 20-day EMA ($286). If this support also cracks, the decline may extend to the support line of the wedge.

Uniswap (UNI) turned down from $44.90 on May 5, suggesting profit-booking at higher levels. The bears tried to pounce on the opportunity and sink the price below the 20-day EMA ($38.68) today.

However, the long tail on the day’s candlestick indicates strong buying at the 20-day EMA. This suggests the sentiment remains positive and the bulls are buying on dips. The buyers will now try to push the price above $45.

If they succeed, it will signal that correction is over and the pair is ready to climb to the resistance line of the channel at $51.50.

Conversely, if the price again turns down from $45, the UNI/USDT pair may consolidate in a tight range for a few days. A break and close below the 20-day EMA will be the first sign of weakness and that could result in a drop to the support line of the channel.

S&P Global downgrades Coinbase credit rating for weak Q2 earnings, competitive pressures
Bitcoin price corrects after hitting a wall at a multi-month descending trendline
The Ethereum Merge on Course After the Goerli Test Merge Was Successfully Completed
Russia plans to roll out digital ruble across all banks in 2024
Binance Receives Approval In-Principle to Operate in Kazakhstan