The amount of Ethereum deposited to the ETH 2.0 contract has hit a new all-time high of 3.493 million ETH. This amount roughly translates to $6.568 Billion as seen in the following screenshot courtesy of DappRadar. 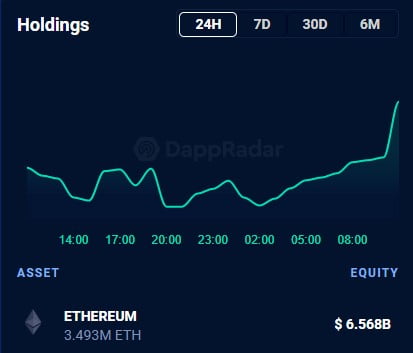 Ethereum Investors Are Ready for a Proof of Stake Algorithm

Ethereum investors continually depositing ETH to the ETH 2.0 contract is proof that they are ready to migrate from the current Proof-of-Work algorithm to Proof-of-Stake. To note is that only 524,288 ETH was required to launch the Beacon Chain that would usher in the process of migrating into ETH 2.0. The current amount of deposits exceed the required amount by a factor of 6.66x.

In a Tweet earlier today, Ethereum 2.0 researcher, Justin Drake, emphasized that the Ethereum community was ready to remove Proof-of-Work as soon as possible. His comments can be seen in the following tweet.

With respect to price, Ethereum is once again on a path towards testing the $2,000 price area. In an earlier analysis, it was determined that Ethereum would retest this price area due to the hype surrounding the $1,400 stimulus checks as well as the implementation of EIP-1559.

However, Ethereum miners are against the Ethereum Improvement Proposal (EIP-1559) that aims at taming the amount of ETH in fees paid out per transaction. Miners have consequently planned to move their hash rate to the Etheremine mining pool for 51 hours on the 1st of April, as a ‘show of force’ against the proposal.

Miners intending to ‘protest’ EIP-1559 has pointed out that the Proof-of-Stake migration needs to happen sooner than later. If the migration to Proof of Stake is accelerated, deposits to the ETH 2.0 will most likely continue to increase in anticipation for staking and its associated rewards. The price of Ethereum is also bound to increase as tradable ETH supply continues to decrease.

Experts explain how music NFTs will enhance the connection between creators and fans
The crypto industry needs a crypto capital market structure
NFT hype evidently dead as daily sales in June 2022 dip to one-year lows
Ethereum average gas fee falls down to $1.57, the lowest since 2020
Multichain adds Rootstock to its blockchain bridge ecosystem