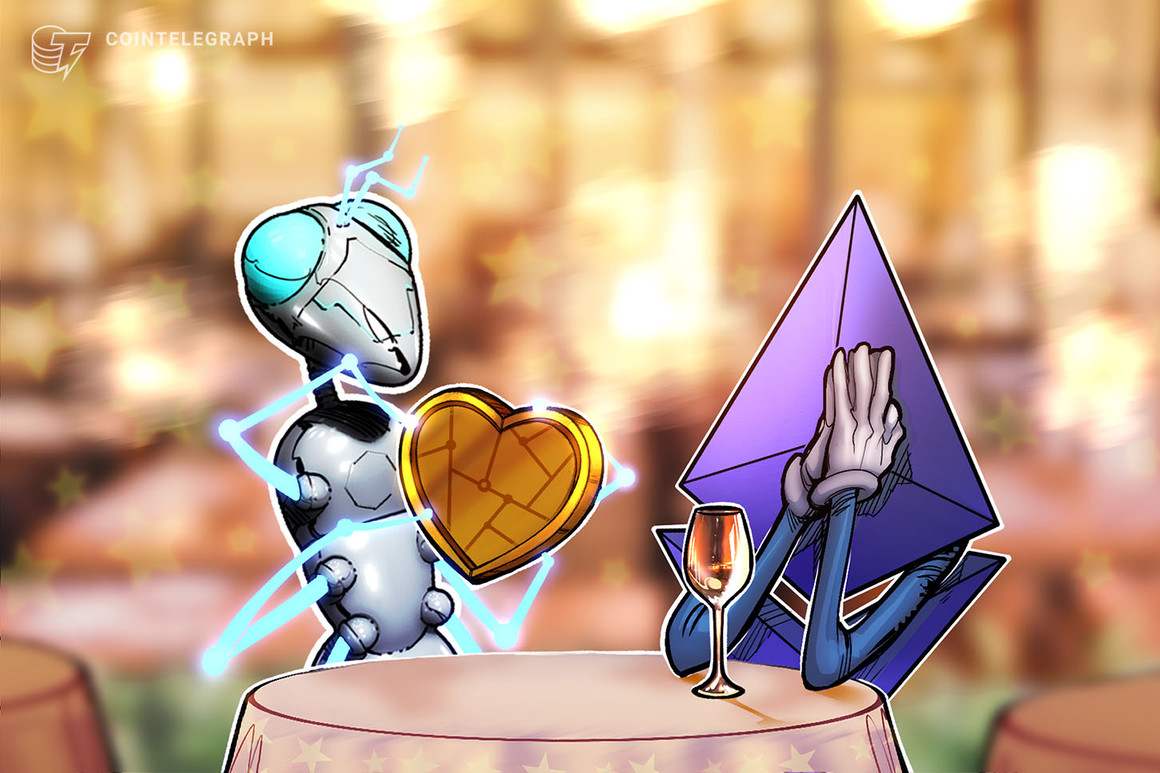 The decentralized finance movement was a ticking time bomb waiting to detonate when it finally exploded in 2020. From automated market makers to the industry’s current obsession with liquidity mining, DeFi has grown leaps and bounds over the last year.

Most decentralized finance applications are deployed on the Ethereum blockchain, bringing billions of dollars onto the network and pushing it to its maximum operational threshold. While the capabilities of the underlying network may seem like the only thing holding DeFi back, Ethereum isn’t slacking either.

As Ethereum 2.0 gears up for its transition, there’s a lot in store for 2021. Both DeFi and Ether (ETH) have been doing exceptionally well, with the native Ethereum token recently retracing its all-time high and even reaching a $2,000 valuation.

While some vocal community members believe this pump is the result of a bubble similar to the initial coin offering boom of 2017, there are many reasons to think this isn’t the case.

DeFi has brought a breath of fresh air to the cryptocurrency space, spawning countless new tokens that have revolutionized decentralized lending and borrowing services. The short-lived Yam Finance, which attempted to simplify the yield farming experience and transform blockchain governance into a practical model, quickly became one of the fastest-growing platforms in the DeFi space.

Projects like Uniswap even resurrected the concept of decentralized exchanges using an automated market maker model. This allows the system to price trades without relying on liquidity from a counterparty. Instead of using order books, the AMM prices assets using the ratio of tokens in a liquidity pool to determine supply and demand.

Uniswap’s surge in use has been fueling the DeFi engine for quite some time, with daily trading volume rising from around $1 million to $1 billion between July 2020 and September 2020. Without being tied down by order books, Uniswap can execute orders on-chain, meaning transactions are made and settled on the network directly, and this has become one of Ethereum’s most prominent features.

This has driven the number of smart contract calls on Ethereum to skyrocket, reaching new all-time highs and creating a token economy that is increasingly being managed by code. However, while DeFi’s trustless ecosystem has brought greater efficiency levels and more automation opportunities, it’s still far more complicated than traditional offerings have become.

This is a major problem that DeFi needs to address before it can attain more mainstream adoption. The act of buying and selling cryptocurrencies already needs work from a consumer’s perspective, but in its current state, DeFi is still very much “function over form.” Outfits like Yearn.finance have brought algorithmically managed portfolios to DeFi, but there’s still a lot of work to be done.

“Yield farming is not sustainable, but it is helping to bootstrap the industry in the short term and attract developers,” said Rune Christensen, founder of veteran DeFi platform MakerDAO, in a conversation with Cointelegraph, adding:

“Once the markets cool down, the next stage for DeFi will be integration with traditional finance and the tokenization of real-world assets so they can be used in DeFi protocols on-chain.”

He also mentioned that DeFi is currently fully reliant on the Ethereum platform, especially because it’s dependable on composability between current DeFi applications and ETH as a primary source of collateral and stability. However, there may be other issues in the way of DeFi’s growth.

This is a sentiment shared by many members of the community. According to Illia Polosukhin, CEO of Near Protocol — a blockchain that allows for the creation of decentralized applications and is interoperable with Ethereum — DeFi might just keep growing on Ethereum.

“Most of the applications are built to work with and around current limitations and they would be only moderately successful on other chains,” he said. “It’s not just the apps themselves, but the whole ecosystem of users, assets, other applications, and integrations.” However, there may be other issues in the way of DeFi’s growth.

Those issues include the launch of Eth2 and its potential effects on decentralized finance. The MakerDAO founder claimed that it will likely have a smaller impact than expected, with fewer new DeFi apps. “Layer 2 scalability solutions with high-security bridges will probably enable more retail-focused DeFi,” he said.

Introducing more complexity is taxing for the end-user, especially with the rough user interface/user experience systems that seem prevalent throughout the space. Still, this would allow DeFi smart contracts to interact and transact automatically without any human help across multiple platforms.

At the moment, Ethereum benefits from application composability and greater liquidity than any other smart-contract-enabled blockchain, but dismantling either of these can open the floodgates for DeFi apps to shift platforms.

The potential effects of Ethereum 2.0 on DeFi are still unclear. Ideally, the platforms should bring scalability, composability and liquidity, but this is no mean feat, especially while many decentralized applications are migrating to layer-two solutions and application-specific chains. According to Kevin Davis, chief technology officer of the Kava DeFi platform:

“It will still be a few years before Eth 2.0 is a significant player in the DeFi space, so for now all we can do is wait and see. The biggest bottleneck is the lack of skilled developers and mature developer ecosystems and tooling. We are still in the early days, and very few individuals/teams/companies have made it anywhere near the edge of the productivity curve.”

Wrapped assets are also a considerable part of the DeFi space, with Wrapped Bitcoin (WBTC) bringing the original cryptocurrency, Bitcoin (BTC), to smart contract platforms. Wrapped Bitcoin is an ERC-20 token backed by actual Bitcoin, and it has around $6 billion worth in circulation on Ethereum at the time of writing.

While most DeFi tokens are built on the ERC-20 standard — a framework for designing tokens on Ethereum — ETH is not. Because this framework was only created after ETH, the token isn’t technically compliant with the ERC-20 standard. But with Wrapped Ether (WETH), it can now also effectively be used as a regular token on DeFi platforms.

With wrapped assets, Ethereum can bring liquidity to any tokenized asset on a variety of platforms, bringing hundreds of millions of dollars to the network. The surge in smart contract calls and the overall number of transactions has pushed ETH gas fees to a new level, with high gas prices becoming quite typical. Polosukhin told Cointelegraph:

“More scalable infrastructure can free developers from having to think about that — developers can build faster and more complex applications when they don’t have to worry about the same types of issues that a limited capacity network would have.”

During a token launch, this can be catastrophic, as hordes of users flood the network to get their hands on it as soon as possible. This leads to miners prioritizing transactions with higher fees, which then inflates transaction costs as the people in the queue try to cut to the front of the line.

While high transaction fees could hurt the space, more incentivized miners ultimately secure the network better. From this perspective, the increase in miner fees could also be seen as a sign that Ethereum is becoming more secure. However, this makes the barrier for entry higher than some would be comfortable with. Small investments make small profits, and with similar fees for both $100 and $100,000 transactions, users transferring large amounts have an undisputed advantage.

That being said, Ethereum is shifting away from the proof-of-work model that incentivizes miners through block rewards and miner fees, instead opting for a proof-of-stake model on the upgraded Eth2 network. Further, the median Ethereum average weekly transfer value has been steadily growing, which is a strong signal that the network is shifting toward fewer novice investors.

Beyond the promise of Ethereum 2.0, scaling the “world computer” has been an ongoing effort for the last few years. The recently launched Optimistic Ethereum testnet is a layer-two scaling solution project that offers instant transactions at a much lower cost. Further, this can be implemented using the current Ethereum infrastructure, and popular DeFi projects like Synthetix, Uniswap and Chainlink have signed on as early adopters.

DeFi and Ethereum are a codependent couple, and while their progress and development run in parallel, they are both growing steadily yet independently. With solutions like the Optimistic testnet and the upcoming shift to proof-of-stake, the Ethereum platform seems primed for even more DeFi action in 2021.

According to MakerDAO’s Christensen, the biggest bottleneck for developing new DeFi applications is “the lack of clarity around how to interact safely with legal and real-world political and financial systems in order to gain real economic relevance.”

As both ETH’s and the DeFi industry’s market capitalization grows, new projects are setting up shop faster than ever before. DeFi has grown into a burgeoning arena for innovation and development in the blockchain space, and with how it grew against insurmountable odds last year, there will be far more windows for growth in the times ahead.