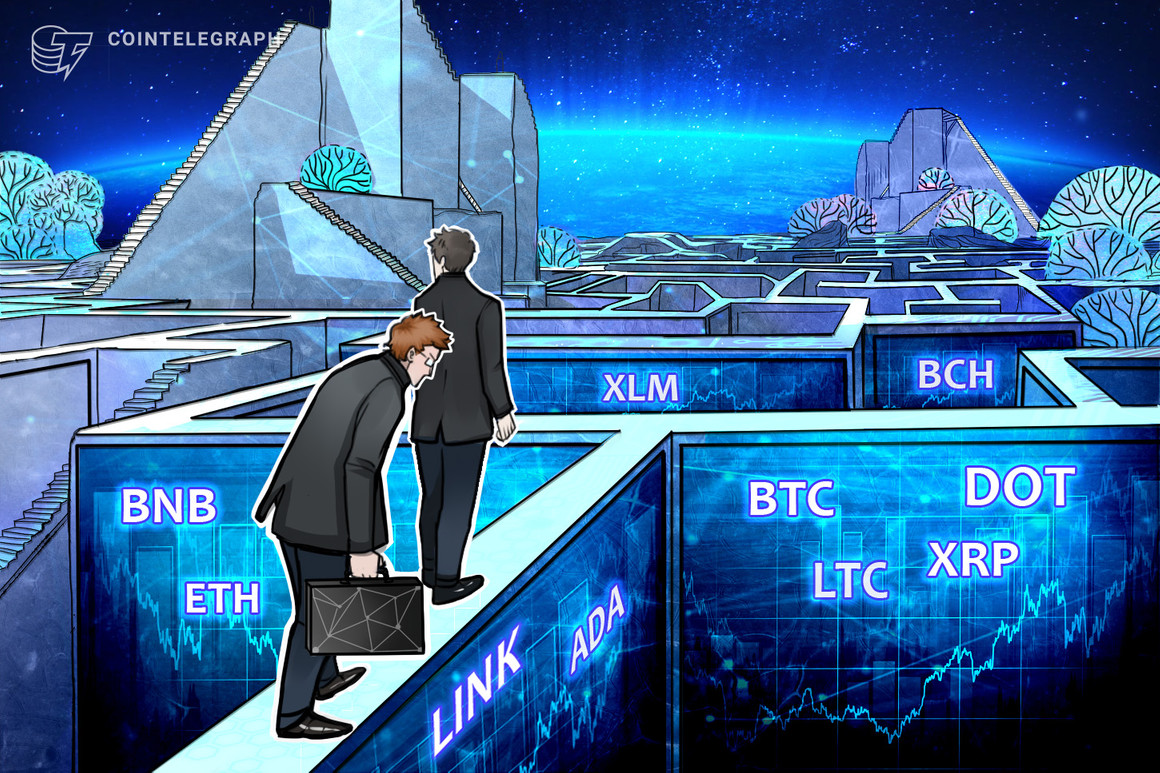 Every bull market witnesses periodic pullbacks, where the weaker hands sell anticipating a top and the stronger hands accumulate for the long term. Data from Coinbase Pro shows two large Bitcoin (BTC) outflows this week, suggesting that institutions are likely continueing to buy the current dip.

Comparing historical data, on-chain analytics resource Whalemap, recently said that previous macro tops in Bitcoin in 2017 and 2019 coincided with thousands of large Bitcoin transactions worth $5-7 million. However, the researchers believe there is “no such FOMO in sight for BTC.”

JPMorgan strategists Joyce Chang and Amy Ho recently endorsed a 1% allocation to Bitcoin in multi-asset portfolios “to achieve any efficiency gain in the overall risk-adjusted returns of the portfolio.”

With gold and the S&P500 both seeing a downturn in the short term, investors looking to hedge their portfolios may look for alternatives such as cryptocurrencie, which may limit the downside for Bitcoin.

While data suggests that the downside is limited, let’s analyze the charts of the top-10 cryptocurrencies to determine where buyers may step in.

There is a tug of war currently going on between the bulls and the bears. The bulls attempted to resume the up-move on Feb. 25, but could not sustain the higher levels. Bitcoin reversed direction and broke below the 20-day exponential moving average ($48,159), which shows selling by the bears at higher levels.

However, the long tail on today’s candlestick shows that bears are not able to sustain the price below the 20-day EMA. This suggests traders are buying on dips.

The flat 20-day EMA and the relative strength index (RSI) near the midpoint suggest a possible consolidation in the near term. The support of the said range could be at $41,959.63, which is just above the 50-day simple moving average ($40,914).

If bears can sink the price below the 50-day SMA, the selling could intensify and the pair could even drop to $28,850.

Although the price dipped below the 50-day SMA today, the bears could not break the Feb. 23 intraday low at $1,350. This shows a lack of selling pressure at lower levels.

The bulls have pushed the price back above the 50-day SMA. If they can sustain the momentum and propel the ETH/USD pair above the 20-day EMA, it could enhance the prospects of retesting $2,000.

On the other hand, if the price again turns down from the 20-day EMA, it will suggest a change in sentiment from buying the dips to selling the rallies. If the bears break the $1,350 support, the pair may drop to $1,000.

Cardano (ADA) is in a strong uptrend and has broken into the top-three cryptocurrencies by market capitalization for the first time. The bulls attempted to push the price above $1.20 on Feb. 25 but failed. However, the bulls successfully flipped $0.9817712 to support today, which suggests aggressive buying on every minor dip.

The buyers have driven the price above the $1.20 overhead resistance, indicating the resumption of the uptrend. The altcoin could now rally to the next target objective at $1.25.

Both moving averages are sloping up and the RSI in the overbought territory, suggesting that bulls are in control.

This bullish view will be invalidated if the ADA/USD pair fails to sustain the breakout and sharply reverses direction, breaking below the 20-day EMA ($0.92).

The failure of the bulls to push Binance Coin (BNB) above the downtrend line on Feb. 24 may have attracted another bout of profit-booking by traders. The altcoin has pared most of the gains made on Feb. 19.

If the current rebound sustains, the bulls will make one more attempt to push the price above the downtrend line. If they succeed, it will suggest that the short-term correction could be over. The BNB/USD pair may then rise to $300 and then to $348.6969.

The upsloping 20-day EMA ($192) and the RSI in the positive zone suggest bulls have the upper hand. Falling below the downtrend line and the 20-day EMA would invalidate this bullish scenario. Such a move could pull the price down to $118.

Polkadot’s (DOT) sharp recovery on Feb. 23 faltered on Feb. 24 as the bulls could not push and sustain the price above the resistance line of the ascending channel. This may have attracted profit-booking from the dipbuyers.

The buyers are currently attempting to defend the 20-day EMA ($30.30). If they manage to sustain the bounce, the DOT/USD pair will again try to break out of the resistance line of the channel and retest the all-time high at $42.2848.

The 20-day EMA is gradually sloping up and the RSI is above 61, indicating a minor advantage to the bulls.

The long tail on the Feb. 23 candlestick shows buying on dips, but the bulls could not keep up the momentum and push XRP price above the 20-day EMA ($0.048) on Feb. 24. This showed that demand dried up at higher levels.

The price has again dipped back to the 50-day SMA ($0.40). A lack of a strong rebound could attract further selling and the XRP/USD pair may drop to $0.359. A break below this support could clear the path for a fall toward $0.25.

Contrary to this assumption, if the pair sustains the current bounce, the bulls will make one more attempt to push the price above the $0.50 overhead resistance. If they succeed, the pair may consolidate between $0.65 and $0.359 for a few days.

Litecoin (LTC) rallied above the 20-day EMA ($192) on Feb. 25, but the bulls failed to sustain the higher levels as seen from the long wick on the day’s candlestick. This suggests that traders are booking profits at higher levels.

However, the long tail on today’s candlestick suggests that bulls are buying the dips to the 50-day SMA ($166). If the bulls can push the price above the 20-day EMA and the $205.186 overhead resistance zone, the LINK/USD pair may rise to $230.

Contrary to this assumption, if the bulls fail to sustain the current rebound, the pair may U-turn and drop below the 50-day SMA and the uptrend line. If that happens, the pair may slide to $120.

Chainlink (LINK) could not climb back into the ascending channel on Feb. 24, attracting profit-booking from the aggressive bulls who may have purchased the dip on Feb. 23. The altcoin turned down on Feb. 25 and dipped back to the 50-day SMA ($24.70) today.

The downsloping 20-day EMA ($28.80) and the RSI in the negative zone suggest bears have the upper hand. If the price slips below the 50-day SMA, the decline could extend to the critical support at $20.111.

Contrary to this assumption, if the current rebound off the 50-day SMA sustains, the bulls will make one more attempt to push the price above the 20-day EMA. If they succeed, the LINK/USD pair may begin a new uptrend.

The relief rally in Bitcoin Cash (BCH) could not even rise to the 20-day EMA ($578) on Feb. 24 and 25, indicating a lack of urgency among the bulls to buy at these levels. The price turned down on Feb. 25 and dropped to the uptrend line.

The downsloping 20-day EMA and the RSI in the negative zone suggest bears are in control. If the sellers sink the price below the uptrend line, the BCH/USD could start a deeper correction to $370.

On the contrary, if the bulls can build up on the current rebound off the uptrend line, the pair may rise to the 20-day EMA. A breakout of this resistance could push BCH price to $631.71.

The downsloping 20-day EMA and the RSI in the negative territory suggest advantage to the bears. If the sellers can sink the price below the support line of the descending channel, the XLM/USD pair may decline to $0.23.

Conversely, if the bulls can sustain the current rebound off $0.35, the pair may rise to the 20-day EMA. A breakout of this resistance will suggest the bulls are back in the game. The pair could then rally to the resistance line of the channel.