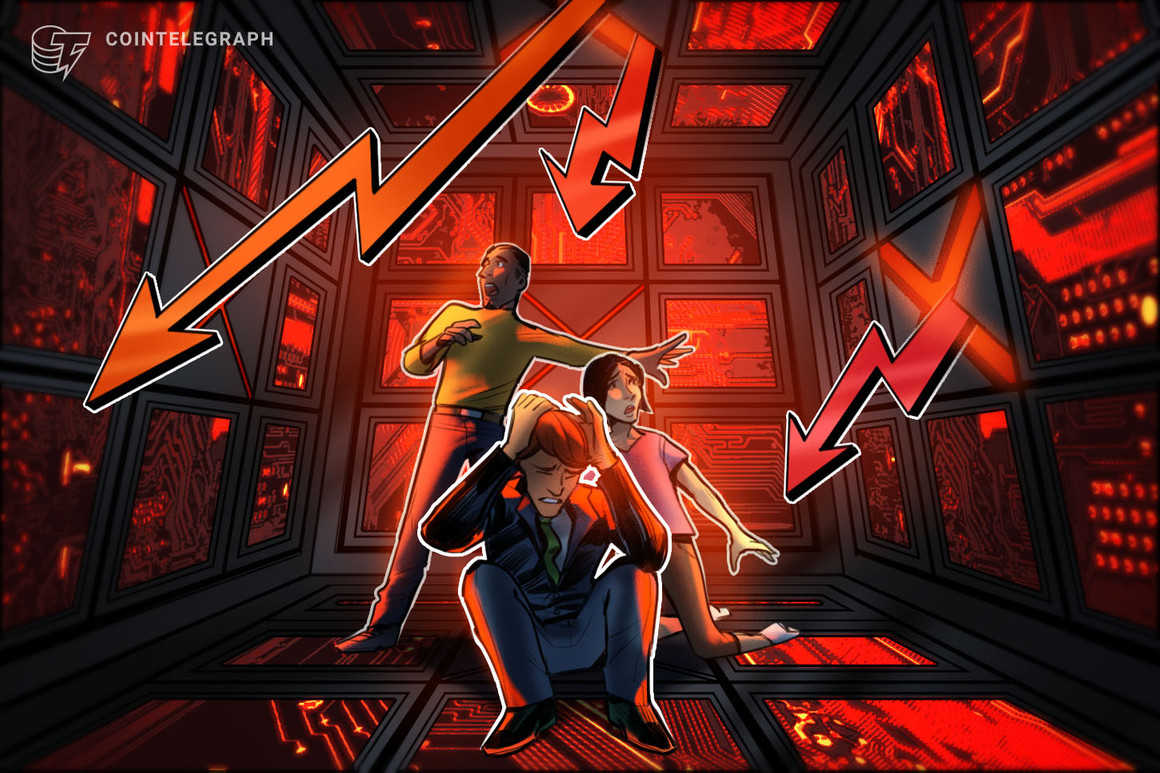 Another wave of selling pressure hit the cryptocurrency market on Feb. 23 as Bitcoin struggles to reclaim the $49,000 level.

Data from Cointelegraph Markets and TradingView shows that Bitcoin fell under intense pressure in the early trading hours on Tuesday and this pushed the price of BTC as low as $44,927 before buyers arrived to stop the descent.

The majority of altcoins and DeFi tokens are now even deeper into their double-digit losses and Bitcoin (BTC) price has dropped by more than $10,000 in the past 48 hours.

At the time of writing, BTC is trading at a price of $48,600, which reflects a 11% decrease for the day but according to Cointelegraph analyst Marcel Pechman, pro traders have looked to buy the dip and opened new leveraged long positions.

Today’s market downturn has overshadowed several positive developments for the cryptocurrency ecosystem, including the news that Bitfinex and Tether have settled their case with the Office of the New York Attorney General and agreed to pay $18.5 million for damages to the state of New York. Both parties also agreed to submit to periodic reporting of their reserves.

Interest in the first Bitcoin ETF in North America has also continued to explode as the Purpose Bitcoin exchange-traded fund has grown to $564 million in assets under management just five days after the fund was launched. Filings also show that the fund added 2,251 BTC being added to the fund on Feb.23.

Despite the market-wide carnage, many crypto traders and professional investors view the current pullback as a necessary break that allows overbought assets to retest key underlying support levels.

As pointed out by Twitter user ‘Bitcoin Archive‘, corrections like these are par for the course and were commonplace during the 2017 bull market which had “9 dips between 20-40%”. Despite these reoccurring deep corrections the market still increased by “20 times from its previous all-time” high over the course of 2017.

Summing up how that relates today and where BTC is headed, Bitcoin Archive stated:

“We are now sitting on 2.35x the previous cycle ATH OF 20k. This rally is just getting started”

Traditional markets also faced early selling pressure on Tuesday morning but they were able to climb back into the green shortly after Federal Reserve Chair Jerome Powell reaffirmed that the Fed will maintain the current accommodative policies, including keeping benchmark rates near zero and asset purchases at the current pace of $120 billion per month.

Bitcoin’s $13,000 drop over the past 48-hours has taken a heavy toll on the altcoin market and many of the recent high-flying DeFi tokens took the brunt of the damage.

A select few projects were able to buck the trend and post positive gains on Feb. 23, as new announcements about blockchain interoperability-related projects provided a well-needed lift to tokens focused on layer-2 and cross-chain transactions.

Solana (SOL) rose 11.23% to trade at $14.94 after the release of its new automated market maker protocol Raydium. Fantom (FTM) price also rallied by 24% after the team announced a collaboration with Yearn.finance and the rollout of a cross-chain bridge to the Ethereum (ETH) network.