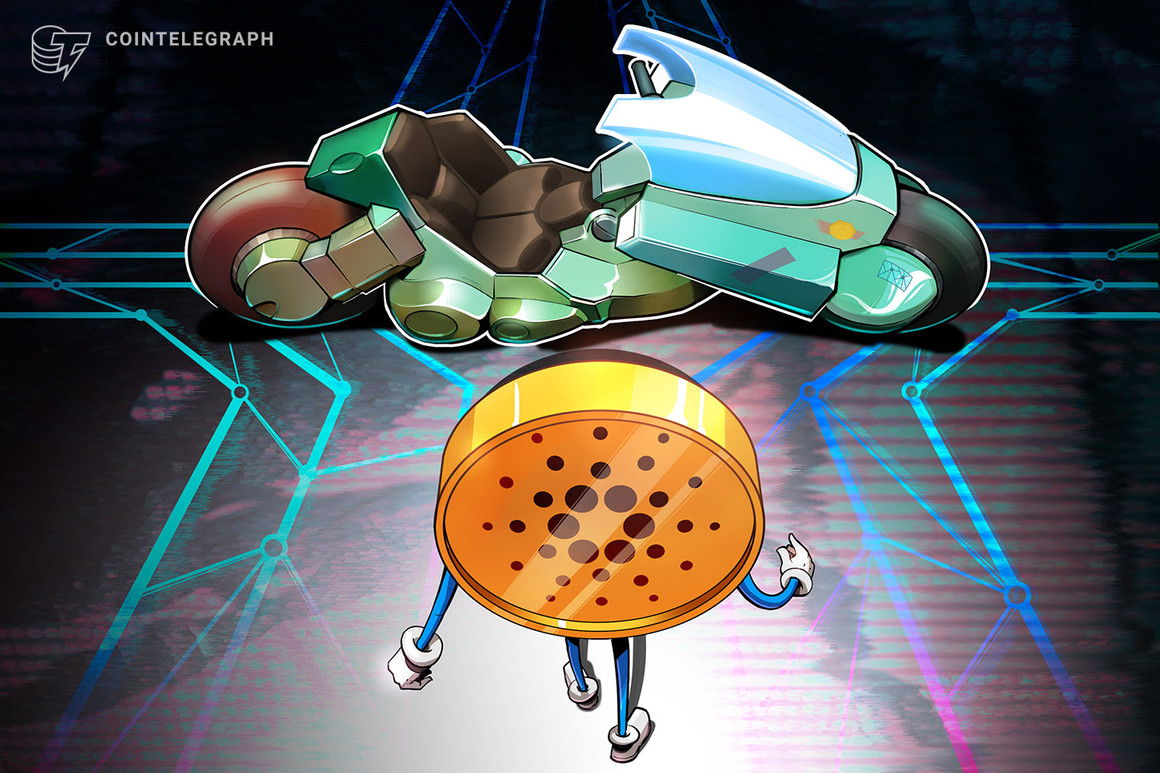 The Cardano Foundation’s coin ADA, hit its all-time high of $0.97 on Feb. 12, having started the year trading at $0.18, thus entailing 438% gains year to date. Apart from the macro trends in the cryptocurrency industry driving up the price of flagship assets, such as Bitcoin (BTC) and Ether (ETH) translating to other altcoins, such as LINK, DOT, etc., Cardano’s growth could also be attributed to the network updates that Cardano has been running on its blockchain network.

The team expects to have launched the mainnet by the end of February. The other features of the Goguen update will roll out simultaneously in accordance with the different phases of the Cardano roadmap.

In terms of functionality, this upgrade would equate Cardano’s native tokens to ERC-20 fungible and ERC-721 nonfungible tokens on Ethereum. For the first time, users on the Cardano blockchain will be able to create their own tokens, be it fungible tokens or NFTs. In addition to these similarities with the Ethereum blockchain, there are design differences between Cardano’s native tokens when compared to Ethereum tokens.

The first major difference following the upgrade is that there will be “no execution fees,” which are usually charged to a user when interacting with a token smart contract on the Ethereum blockchain, known as gas fees.

The recent bull runs witnessed in Ether and other Ethereum blockchain tokens have led to extremely high gas fees due to network congestion, thus discouraging retail investors from getting involved. Hinrich Pfeifer, general secretary of the Cardano Foundation, discussed with Cointelegraph how Cardano’s native tokens would differ in this aspect: “Native tokens on Cardano are ‘forged’ on-chain with no need for a smart contract, and therefore, no execution fee is required to transact native tokens on Cardano.” He added further:

“Instead, sending tokens requires a nominal fee (called the ‘min-ada-value’), payable in ADA, to be sent alongside the tokens. You may also bundle multiple native tokens together and send them together in one transaction (this raises the ‘min-ADA-value’). However, this fee does not depend on network congestion, or rely on smart contract execution.”

Not needing smart contracts to forge tokens would lead to other advantages because there would be no room for fraud perpetrators to exploit smart contract vulnerabilities, human error and other risks associated with smart contracts — something which Ethereum co-founder Vitalik Buterin warned the community against last year.

Pfeifer further elaborated on how “the opportunity to siphon funds through a smart contract exploit is eliminated” on the Cardano blockchain: “User-defined native tokens on Cardano use the same underlying token logic as the Cardano blockchain itself. Cardano’s scripting language does not have fixed-size integers, and the ledger itself tracks token movements and handles the token logic.”

“Ethereum has been supporting smart contracts since 2015, yet smart contract development is still a maturing field. With Ethereum, every week, bugs and security risks are discovered and added to registries of smart contract security best practices.”

ADA fighting for No. 4 spot by market cap

ADA has recently hit its three-year high and leap-frogged Polkadot’s DOT and XRP to briefly become the fourth-largest cryptocurrency currently in circulation. Unlike meme coins, such as Dogecoin (DOGE), which have recently been gaining a heap of mainstream attention from the media and even personalities like Elon Musk, Cardano’s growth may be attributed to its sound fundamentals and working principles that it possesses.

Marie Tatibouet, chief marketing officer of Gate.io — a digital asset trading platform — told Cointelegraph that the team led by Charles Hoskinson, the creator of Cardano, “have taken a ‘research-first’ approach to solving the various issues plaguing the modern blockchain ecosystem: lack of speed, high fees, etc.” She added that “for example, Cardano’s Ouroboros algorithm was the first peer-researched consensus algo in the world. […] Their emphasis on doing the work before launching the product has helped them immensely.”

Since institutional investors are a major catalyst to such markets, Cardano intends to gain more traction with them as compared to other blockchain protocols. Pfeifer stated to Cointelegraph:

“We expect Cardano’s value proposition, especially the degree of security and affordability that is guaranteed through our native tokens and focus on formal methods, will prove popular among institutions and enterprises. Other blockchain protocols have struggled with highly-publicised security issues and huge losses of value via smart contract exploits. In turn, this has prompted institutions to take a great deal of caution when exploring blockchain-based solutions.”

In addition, the fact that Cardano has been implemented in Haskell, a functional programming language that is known for its high-liability applications, could open up different business use cases involving large enterprises and even governments. Pfeifer further stated: “Cardano may stand to capture an altogether different share of the market than Ethereum — that of national-level identity solutions, back-end financial infrastructure and powerful enterprise use cases.”

Although the “Ethereum killer” concept has been around since Ethereum has gained monopoly in blockchain use case scenarios, there haven’t been any networks that have been able to generate users and developers as Ethereum currently boasts of. Several networks have been trying to live up to this tag for sometime now and haven’t quite gained the developer interest as expected.

One important aspect to look at while considering the competition for Ethereum would be the scalability issues that Ethereum 2.0 proposes to solve with its move to a proof-of-stake protocol. Cardano’s scalability is expected to arrive through Hydra, which would have multiple heads offering high transaction throughputs, which is measured in transactions per second. Each “Hydra” head can potentially process up to 1,000 TPS.

Pfeifer said that TPS can’t be the only measure of scalability due to Cardano’s Hydra heads structure since different types of transactions can take place on the blockchain, adding: “In the future, each Cardano node (facilitated by our stake pool operators) could run a Hydra head. Therefore, the TPS of the Cardano network could scale accordingly with the number of stake pools running a Hydra head.”

Currently, there are over 1,400 independent stake pools operating on the Cardano blockchain. That being said, Ethereum currently has the largest developer pool, which is building widely used applications and interfaces, such as MetaMask, Compound and Protocol, including the core Ethereum protocol itself. Beck pointed out how Ethereum’s pool stacks up against Cardano:

“Ethereum is still the most actively developed blockchain protocol, with 42,457 commits to its code from an average of 220 monthly active core developers. Cardano is not that far behind, with 37,327 commits, but IOHK is also involved in Ethereum Classic, which may inflate the data the protocol is attributed to.”

This high developer activity is critical for the growth of any blockchain and its network effects. It’s also important to create smart contract standards and best practices as Ethereum attempted to do. Additionally, the scaling issue is currently being addressed by layer-two networks, such as Optimist Rollups and ZK-Rollups, and as Beck further stated, they decrease “fees and congestion by increasing the throughput of the blockchain to more than 1,000–2,000 TPS.”

The rollup chain can also be thought of as an independent data shard that allows experimentation through various data and execution models that still settle on Ethereum. These rollups are a part of the Eth2 roadmap and intend to make Ethereum more scalable in the near term.

Metcalfe’s law states that the value of a particular network is directly proportional to the number of users in the network. This could perhaps be the most important metric to value a network, as it alludes to the activity happening on the network being gauged. Here is where Ethereum completely dwarfs Cardano, with daily active addresses standing at over 760,000 in comparison to around 71,000 active users on Cardano.

Regardless of their application and perceived rivalries, at this point, it’s evident that Ethereum is still far ahead of Cardano in the blockchain race considering the users and numbers of DeFi applications based on their respective blockchains.

It is likely that Cardano can successfully catch up to Ethereum over time with its strong fundamentals, which might lead to some DeFi applications migrating from Ethereum to Cardano, as done by DNATags recently. Pfeifer, however, approaches the breaking of the hegemony with a positive outlook:

“It is very likely that more than one blockchain protocol will successfully co-exist in the space in the future. Every Cardano entity focuses on interoperability for the good of the entire blockchain industry, rather than direct competition and comparison. We are open to working with other blockchains.”