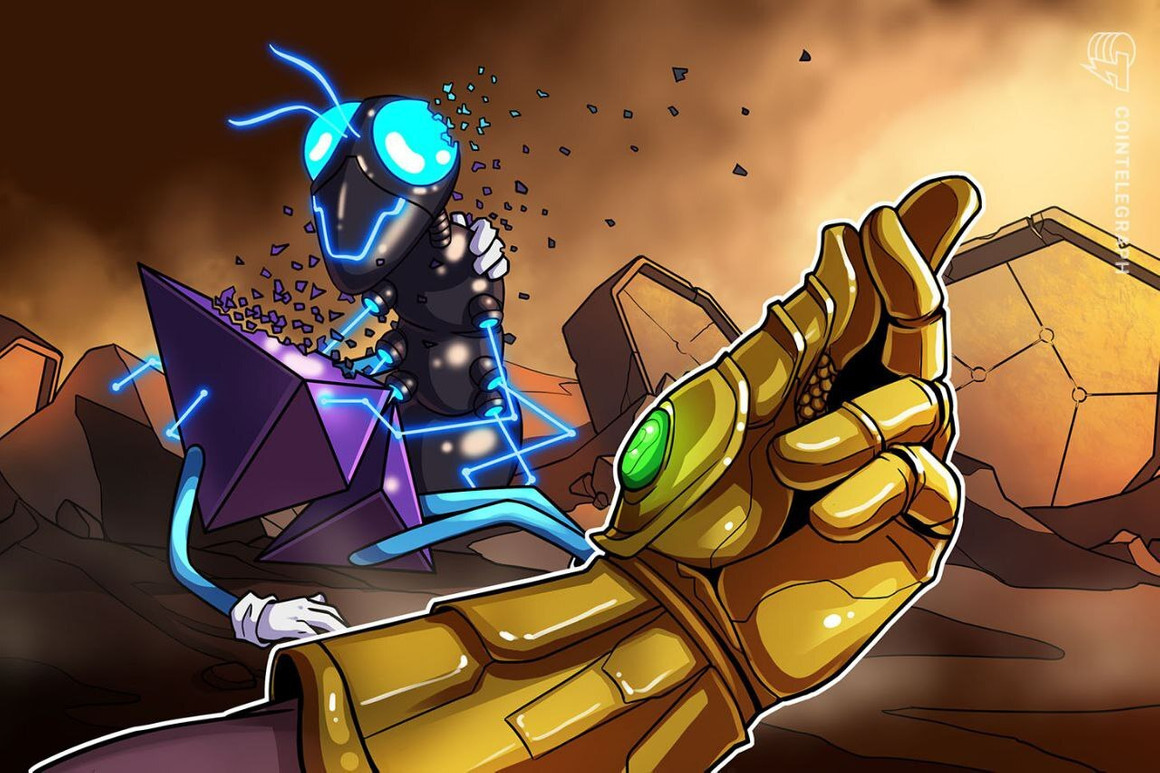 Many researchers and influencers have pointed this out as a bullish sign that illustrates increasing demand for the native token that powers many popular DeFi apps. Others look at this as more of a critical flaw that could make the asset harder to acquire and trade as it becomes progressively more embedded in locked smart contracts and applications.

Last spring, the percent of Ether (ETH) supply on exchanges peaked at around 26%, but since then, there has been a steady decline that puts the same statistic closer to 20.5%, according to data from Santiment.

Some of the factors causing scarcity are obvious. One main driver is DeFi applications that use wrapped Ether (wETH) to be deposited into contracts, such as Uniswap, SushiSwap and Compound.

Currently, the top address on the Ethereum blockchain is the wETH contract, which holds over 5.6 million ETH tokens inside, as collateral for the wETH tokens. This accounts for over 4.9% of the entire ETH supply and has increased by 104% since the same time last year.

The second-largest account is the Eth2 deposit address that holds close to 3 million ETH, more than 2.5% of the total supply. Even though the Ethereum 2.0 Beacon Chain was launched, these tokens are likely to be stuck for the foreseeable future, while developers achieve sufficient stability on the Beacon Chain and reach a consensus that the upgrade to Phase 2 is technically feasible. At present, it is scheduled to take place between 2021 and 2022.

Huobi Global crypto exchange possesses the sixth largest Ethereum account on the blockchain as one of its main holding wallets. Ciara Sun, vice president of Huobi Global Markets, believes there will be certain issues but that they will not seriously affect the use of Ethereum:

“We should keep in mind that although the word ‘locked’ is used for the overall lock amount, most DeFi protocols do not require that those ETHs be really locked, and users can deposit and withdraw their ETH at any time. Once the liquidity in certain places is affected and market makers are profitable, these ETHs will be released immediately to earn these profits.”

Jack Tan, co-CEO of Kronos Research and co-founder of Wootrade, believes the ETH scarcity issue will not impact the trading experience on exchanges. He did mention a secondary effect with scarcity encouraging exchanges to offer more derivative products:

“The only time exchanges have to put up any USDT is when one side is liquidated at a loss and unable to compensate the other side for their profits. In this way, derivatives offer a way for exchanges to have products that traders can speculate and trade on without needing to own the underlying asset.”

Tan noted that derivatives markets are already multiples of the spot market in terms of volume. In traditional finance, the derivatives markets are much larger in market cap as well. He implied that there could be a vested interest for exchanges to shift to derivatives since the fees can be higher and that leverage also drives more trading volume, as the liquidation mechanism forces users to sell their positions.

Another service that stands to benefit is liquidity aggregators. As pools and exchanges compete for liquidity, traders will find slippage and poor price execution becoming increasing problems.

In the DeFi space, non-custodial services, such as 1inch and Matcha, provide order routing that determines the best available price among decentralized exchanges and can even split the order to take advantage of the best prices on multiple exchanges. While not the most efficient with gas fees, this solution can minimize slippage for users on larger trades and eliminate the need to check prices across multiple decentralized exchanges prior to use.

Another option is Wootrade, which aggregates liquidity by creating an order book network that can be integrated directly into the exchanges and DeFi platforms. This shared liquidity concept can allow trading platforms to access liquidity without needing to have physical custody of the assets directly, stretching a central supply across multiple platforms.

The future of ETH

Ethereum is at a crossroads, with one path leading to a transition to Eth2 and the other leading to layer-two solutions or competing smart contract platforms. In its current form, there is no doubt that usage is reaching a critical state, with average daily active addresses steadily increasing from around 250,000 in February 2020 to close to 500,000 in January 2021.

As a result, average Ethereum gas fees regularly peak above $10 per transaction, closing in on the all-time high, which was reached in late August 2020.

The latter scenario may not be the worst thing, as Ethereum 1.0 may continue to exist as a secure network for assets to be minted, especially if miners and developers aren’t keen on rushing an update through. In this case, assets minted on Ethereum 1.0 may be transferred to secondary layers, including Ethereum 2.0, to be used in smart contracts and decentralized applications.

If this was to be the case, ETH should continue to be a highly coveted asset for minting and transferring assets, as well as potential Ethereum 2.0 applications. As Sun pointed out: “ETH supports up to 18 decimal places, and the scarcity in amount does not limit their liquidity.” This implies that a similar trend to BTC may emerge, where simply owning fractions of a token is considered a substantial amount.