In a recent Tweet, the team at Weiss Ratings has pointed out that Bitcoin is a better option than Ethereum when it comes to a buy-and-hold investment strategy. Weiss Ratings demonstrated this fact by pointing out that 2017 was the first time Ethereum hit the $300 mark when Bitcoin was valued at around $1,000.

Three years later and in 2020, Ethereum is once again in the $300 value range whereas Bitcoin is knocking at the $11k price level. In terms of returns, BTC is now at 11x thus demonstrating that Bitcoin is a better option for a buy-and-hod strategy.

However, the team at Weiss did not totally dismiss Ethereum and highlighted that it was a great trading instrument for those who prefer to capitalize on ETH’s price movements.

The full statement by Weiss Crypto Ratings can be found in the following tweet.

What Next for Ethereum in the Crypto Markets?

Further exploring Weiss Ratings’ statement of Ethereum being a great trading instrument, we find that ETH recently broke the $350 resistance level and is currently trading at $352. Furthermore, and using the daily ETH/USDT chart, it can be observed that Ethereum has printed what looks like a double-bottom pattern at the low $300 price area. 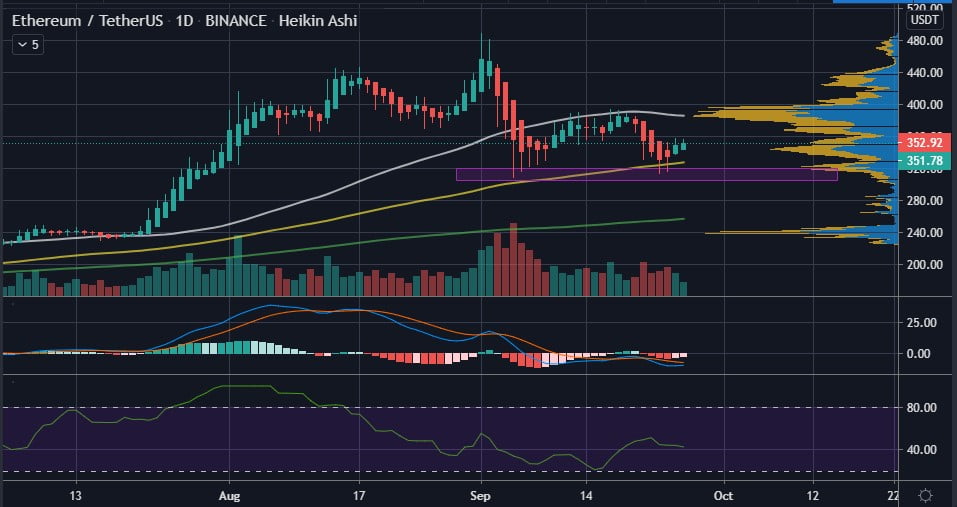 Also from the daily ETH/USDT chart, the following can be observed.

What remains to be seen, is whether Etheruem has enough momentum to break the familiar resistance levels of $365 and $390 as ETH2.0 draws closer to launching on the Mainnet.

As with all analyses of Ethereum, traders and investors are reminded to keep an eye out for any sudden Bitcoin movements that might ruin the party.