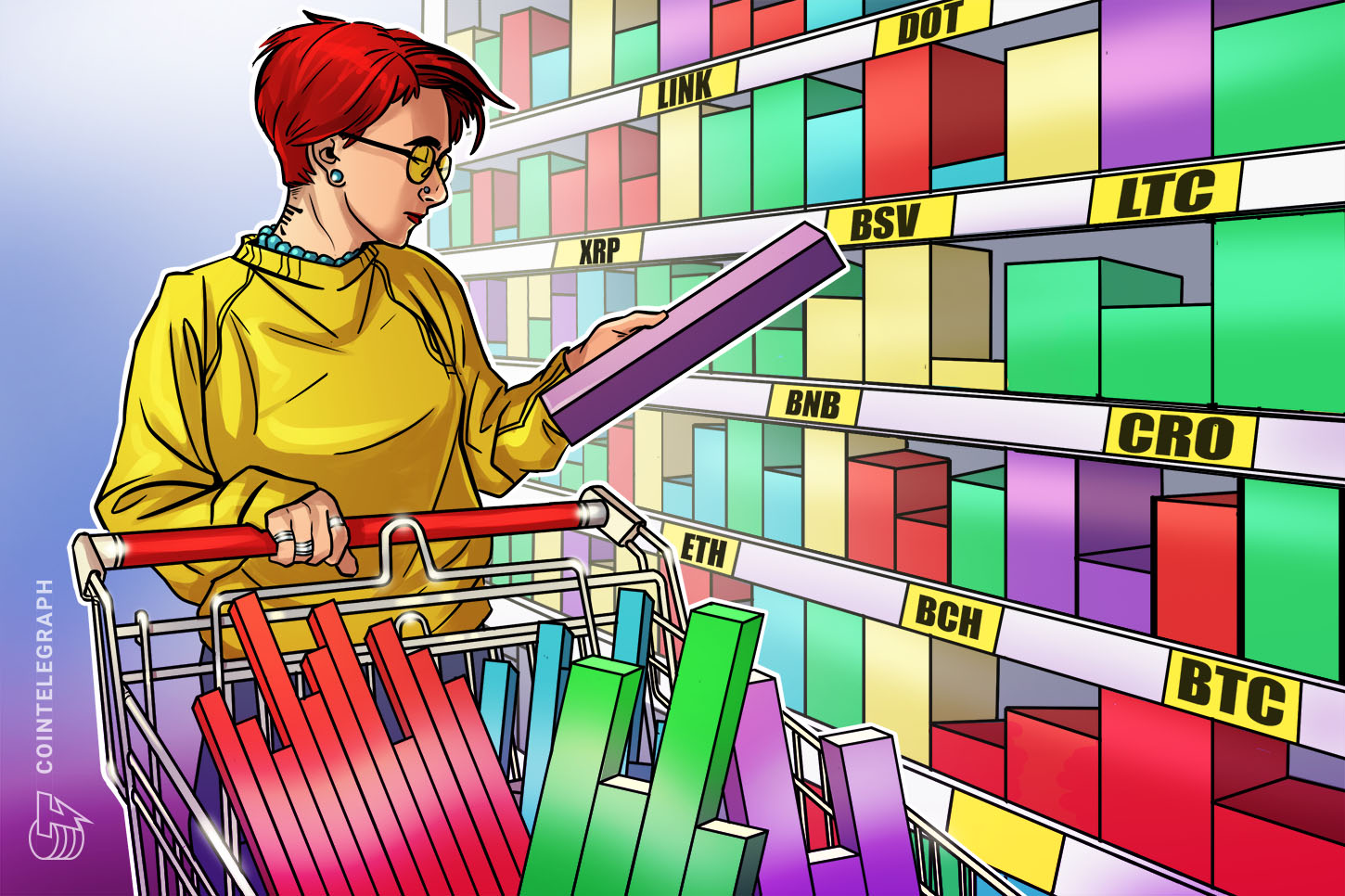 Corrections are healthy for the strength of an uptrend because they shake out the excess exuberance and provide an opportunity to the traders who missed the bus earlier to make an entry at lower levels.

About 68 crypto investors did the same thing when they used the recent dip to purchase anywhere between 1,000–10,000 Ether (ETH).

Buying against the prevailing short-term negative sentiment during a correction is not an easy task but it is generally the right thing to do if the medium-term trend is bullish.

Tops and bottoms are confirmed only in hindsight, hence, selling at the top or buying at the bottom is a difficult task. Instead, traders can consider buying after the price rebounds off a support level repeatedly.

Even these purchases are not foolproof because many times, the price jumps up a little, only to turn around sharply and break below the support. Therefore, traders should always keep a stop-loss to protect their capital.

Let’s study the charts to spot the cryptocurrencies that are showing signs of having bottomed out.

The bulls are attempting to defend the $9,835 level in Bitcoin (BTC) as seen by the long tails on the candlesticks of the past three days. However, they have not been able to push the price above $10,625, which suggests that buying dries up at higher levels.

The short-term trend has turned negative as the moving averages have completed a bearish crossover and the relative strength index is in the negative territory. This suggests that the bears are back in the game.

If they can sink the BTC/USD pair below $9,835.20, there is a minor support at $9,540, which is close to the large symmetrical triangle and is also the target objective of the head and shoulders breakdown.

If this support also cracks, a drop to $9,000 and then to $8,000 is possible. Such a move will shatter sentiment and could drive away buyers.

This bearish view will be invalidated if the bulls can push the price above $11,000 and sustain it.

The rebound off the $308.392 level could not even reach the previous support turned resistance of $366 on Sep. 6, which is a huge negative. A weak rebound after a sharp fall suggests that Ether (ETH) is likely to face another wave of selling.

If the bears sustain the price below $308.392, a drop to $288 is possible. This is an important support to watch out for because if this gives way, the decline could extend to $220.

The 20-day exponential moving average ($390) is sloping down and the RSI has dipped into the negative zone, which suggests that the bears have the upper hand.

This bearish view will be invalidated if the ETH/USD pair breaks out of the $366–$400 resistance zone.

The rebound off the $0.235688 support on Sep. 4 could not rise above the $0.268478 resistance, which suggests that the bears aggressively defended the breakdown level. Currently, the bears are attempting to resume the correction in XRP.

The moving averages have completed a bearish crossover and the RSI is in the negative zone, which suggests that the bears have the upper hand.

This bearish view will be invalidated if the pair reverses direction and rises above the $0.268478 resistance. Such a move will suggest that the correction has ended.

Chainlink (LINK) has been swinging wildly inside the $8.908–$12.89 range for the past three days, which suggests a tussle between the bulls and the bears as they attempt to establish their supremacy.

The 20-day EMA ($13.83) has started to turn down and the RSI is in the negative zone, which suggests that the bears have the upper hand.

If the LINK/USD pair breaks below the trendline, a drop to $8.908 is possible. This is the important support to watch out for because if this breaks down, a drop to $7 is likely.

On the upside, a break above $12.89 will be the first sign of strength. Above this level, a move to the downtrend line is possible. A breakout of this level will suggest that the correction is over.

The 20-day EMA ($259) is sloping down and the RSI is close to the oversold levels, which suggests that the bears are in command.

A break below $200 will be a huge negative as this level has not been broken down convincingly since March 19. The next support on the downside is way lower at $140.

On the other hand, if the bulls defend the $217.55–$200 support zone, the BCH/USD pair could remain range-bound for a few days.

Polkadot (DOT) formed inside day candlestick patterns on Sep. 6 and today as the bulls attempt to stall the decline at the 61.8% Fibonacci retracement level of $3.8572.

However, the rebound on Sep. 6 was short-lived as the bears are currently attempting to resume the decline.

Bitcoin SV (BSV) has rebounded off the $146.2 support, which suggests that the bulls are defending this level. However, the bulls are likely to face stiff resistance at the downsloping 20-day EMA ($185).

However, if the bulls can push the price above the 20-day EMA, a move to the 50-day simple moving average ($202) is possible. A break above this level can retest the $227 resistance.

Binance Coin (BNB) has been swinging wildly for the past few days, which suggests aggressive buying by the bulls on dips and selling by the bears on rallies as both attempt to wrestle the advantage in their favor.

Both moving averages are flat and the RSI is just below the midpoint, which suggests a range-bound action between $18–$24 for a few days. If the bears sink the price below $18, the BNB/USD pair can drop to $14.80.

On the other hand, if the bulls can push the price above $24, the pair could move up to $27.1905. A breakout of this resistance will be a huge positive, with the next target objective at $32.

The bears did not allow Litecoin (LTC) to sustain above the breakdown level of $51 on Sep. 4, which attracted another round of selling that had pulled down the price to about $46 levels.

The only minor positive is that the LTC/USD pair has formed long tails for the past three days, which suggests that the bulls are buying the dips.

However, if the bulls fail to push the price above $51 within the next few days, the bears will again attempt to sink the pair to $42 and then to $39.

This bearish view will be invalidated if the bulls can push and sustain the pair above the breakdown level of $51.

Barring the sharp decline on Sep. 3, the fall in the CRO/USD pair has been gradual, which suggests that traders are not dumping their positions yet. This increases the possibility of another attempt by the bulls to stall the decline.

However, the moving averages have completed a bearish crossover and the RSI is close to the oversold zone, which suggests that the bears have the upper hand in the short-term.